Marcella Calabi, principal consultant at Clarityworks and a multi-talented, award-winning soprano and music teacher, wrote several journal entries over the course of her multi-day stay with the Art Monastery this summer. This is the first of three parts.

So, I’m in Labro and have seen our people in person and in performance. What shining creatures they are, and they are well.

A word about the place: if I hadn’t rented a GPS with the car, it would have taken me a week of erring about to get here; and, even so, I had to stop and ask at the last bit and then call the hotel for help because its street is not in the database.

There are three locations that count. I finally think I understand this, so I can pass it on. Possibly you understood this before.

1. There is the medieval hill town, Labro. This is one of those heaps of ancient stone construction balanced on the top of a steep knoll, with tiny cobbled and staired pathways between the edifices, built amoeba-style with shared walls, and a defense tower near the peak. The only grass is a lawn in front of the tower. This was the location of last night’s performance (more on that later). I don’t know why I didn’t think to look this up before, but here are some images: http://www.labro.gov.it/english/briefpresentation.htm. These medieval hill towns are picturesque in a poignant way, their beauty born of a need or impulse to defend and attack. Looking at them from afar, all gathered up tight, I always think of a cartoon lady, on a chair with her skirts hiked up, going “eeek!” about a mouse on the floor, but actually these guys hurled arrows and probably boiling oil and all that from their perch as well. This one had something to do with fights about dominion going back to before the year 1000 and smouldering their way through the Romeo-and-Juliet wars—yes, really; look it up. 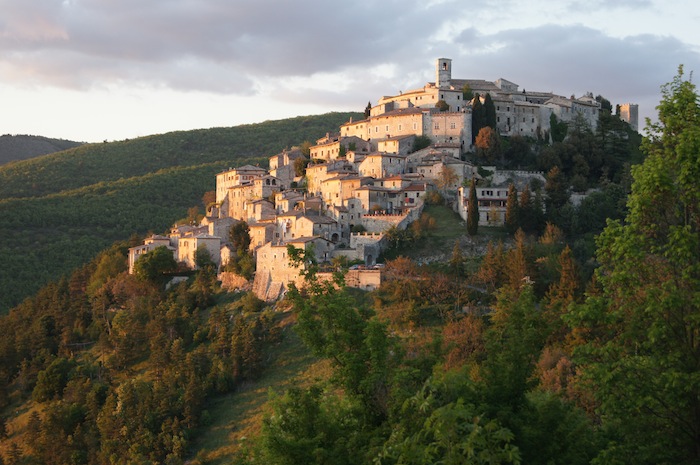 2. There is the former monastery, which is now a hotel. This sits by itself on another hillside across from the town; that’s the street that wasn’t on the GPS. In case this means anything to you, it’s on St. Francis of Assisi’s beat (look up “Franciscan Path”). The Art Monastery Project has been given two rooms here: one to house three people who don’t fit in the house, and one as an office. (I have a room in this same hotel.) They used to rehearse here, too, and were originally intended to perform here as well. But the piece they have constructed is called Ad Mortem—To Death. [Editor’s note: This piece is now known also by the name L’eterno smascherato, as Marcella will explain in subsequent posts.] This is deeply unfortunate as their patron, the proprietor of the hotel and the house in the countryside, had a death in the family too recently to bear the thought. Even if it hadn’t been named that, the custom in Italy is to cancel performing arts activities after a death regardless.

3. There is a house in the countryside—as if this weren’t all countryside, but I mean outside of town in the actual farmland—where most of the Art Monastery people stay. When I first tried to find my way there by car, I turned back, convinced I had missed a turn: I couldn’t believe they walked to the monastery from there. Now I can see that it’s totally doable, but I can also see that they’re in good shape to call it a 40-minute walk. Yesterday, we were held up by a flock of sheep crossing the road. The nearest shopping town for goods, services, and the train station is a 45-minute drive away. They’ve built a small stage for rehearsal work, and they’ve solved in clever ways many of the problems of cramming too many people into the house. 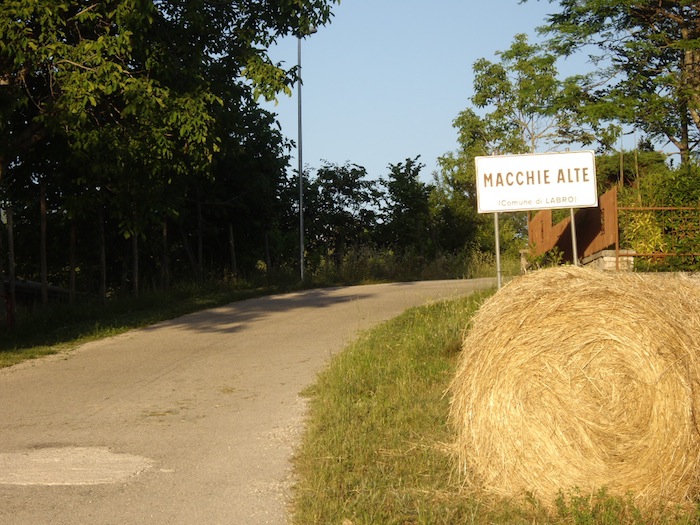 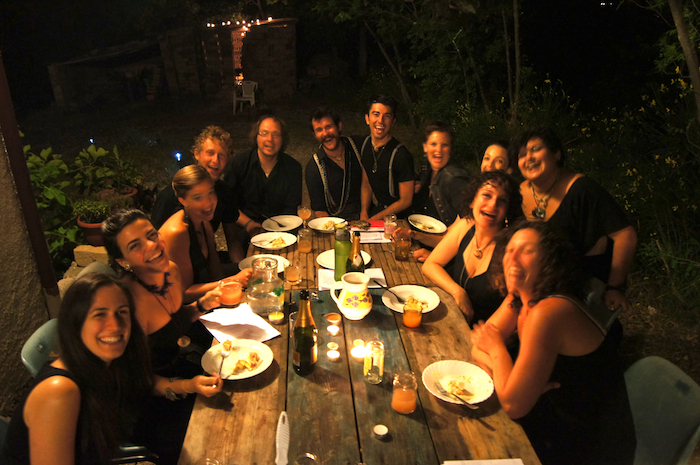 So, back in town, try to picture the tower—crenellations and all.

I wrote the above a few days ago and literally have not had the time to write since. These folk fill their days, all right all right. They trade skill-sharing workshops; they cogitate and design and create and rehearse; they engage in community service and community ritual, including studying and singing Gregorian chant; oh, and they give performances.

And they grapple with an enormous amount of logistics: not having enough wheels to get everyone where they need to go in only one trip; having to be flexible with the people who offer them stuff like rehearsal space and who then renege; having the water simply not come out of the faucets on a capricious but regular basis; losing internet connectivity the same way. Part of all that is because they’re shoestring artists; part is because they’re in the middle of nowhere; part is that the nowhere they’re in is itself suffering from such maledictions as a severe drought. (They use sink water for flushing the toilet, dishwater for the plants. Raphael also waters the garden by taking outdoor showers in it with the hose.) The fields and forests are pure tinder: there’s a huge wildfire across the valley right now, choking the sky with smoke.

Italy, in general, is suffering in the economic crisis, too. I think I’m the only guest in the hotel, which is another reason there are no weddings and conferences to make use of  the Art Monastery’s entertainments. The mood of the populace is grim, in a way I haven’t heard before, in years of travel to this country. The cynicism and creeping hopelessness is well expressed by the speculation—or the truth?—that the wildfires are actually arson, set for any one of several hypothetical reasons. The young people declare in advance that they have no future.

Our artists are holding up a banner of hope and vivacity that is especially touching in this place and time. I spoke to an 18-year-old Italian who longs to dance professionally. He was trying to talk himself out of his dreams, until these young American strivers shook up his summer by modeling inventiveness and persistence.

I’ve seen the show twice now. So… Picture the tower, crenellations and all, with two dramatic streaks of red fabric hanging from the top. Picture a grassy area in front of it, backed by ancient stone buildings and a hill leading up to the peak of the knoll. Picture filling the grassy area with round tables, and setting them with red tablecloths and service for dinner. Picture the sun setting spectacularly behind the hill and the stars coming out. By 9:30pm, people are seated, 9:30 being Italian time for 9:00. There is a restaurateur-sommelier duo who created this dinner festival and makes this happen, calling it Calici Sotto Le Stelle, meaning “goblets under the stars,” a three-course meal with three wine pairings. (They set it up from nothing, serve it, and break it down to nothing every single night for thirty nights in July and August—about nine hours of work per night, not counting the cooking. A couple of the waiters, among them the 18-year-old I mentioned, perform in the opening number as well. And for this meal, in this location, with live entertainment, they feel the economy cannot support charging more than 25 Euros, or about $32.) 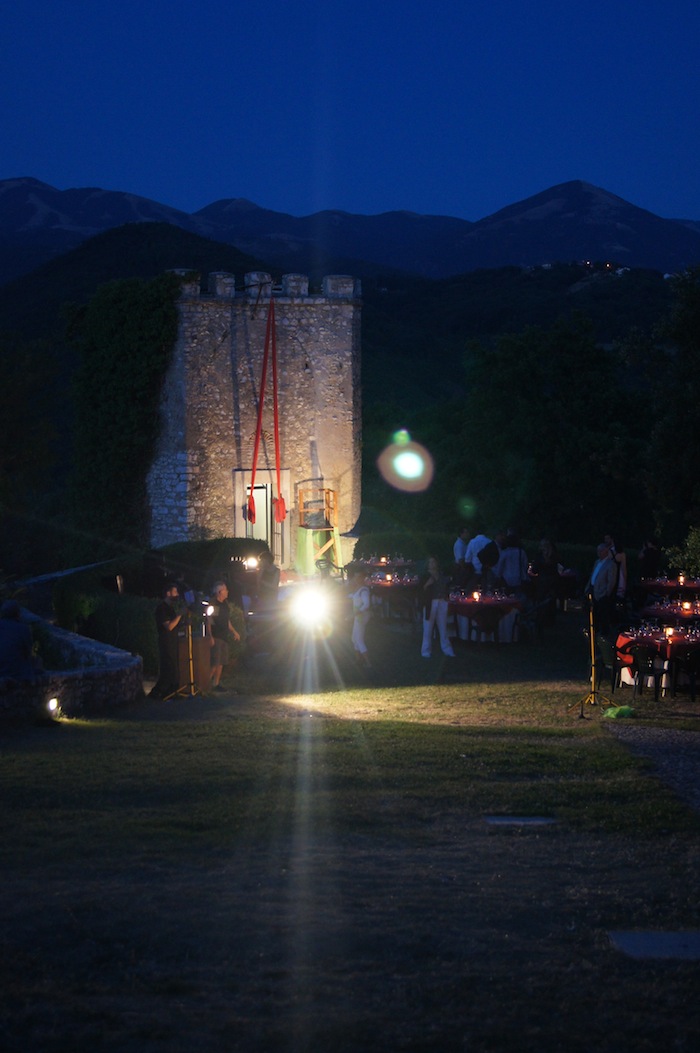 OK, so, it’s dark and starry and suddenly a spotlight floods the hillside, where a troupe of entertainers comes down the hill in an array of jugglers and acrobats and pose-strikers, evoking hundreds of years of tradition… commedia dell’arte… Picasso’s Blue Period circus performers… This isn’t the Art Monastery’s design, but they participate, in a cast that varies from night to night because they do this every evening. In the versions I saw, most of them are wearing gauzy white with green accents and fluttering fans but for Raphael, Neva (or their replacements), and Ryan, who are dressed in glittering black or brown. Charles’s trumpet or Liz’s singing voice—or both—breaks the silence. Neva seduces the whole company Eve-like with an apple; Raffi carries her across his shoulders as she gesticulates dramatically, weaving through the small aisles among the tables; Ryan and Neva take the stands flanking the foot of the tower. The three of them are strong and graceful, gorgeous to look at. 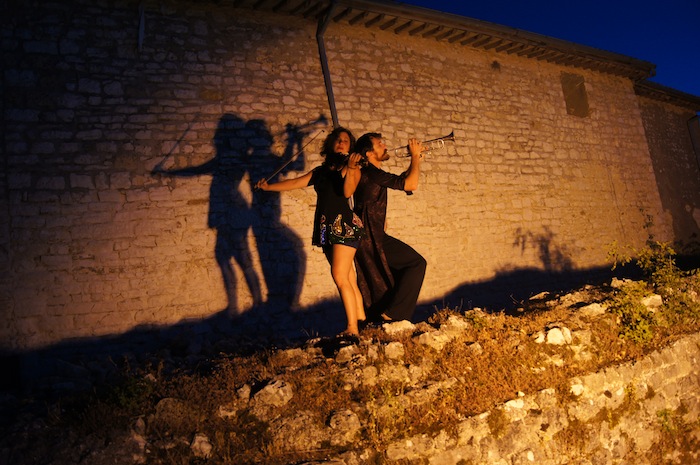 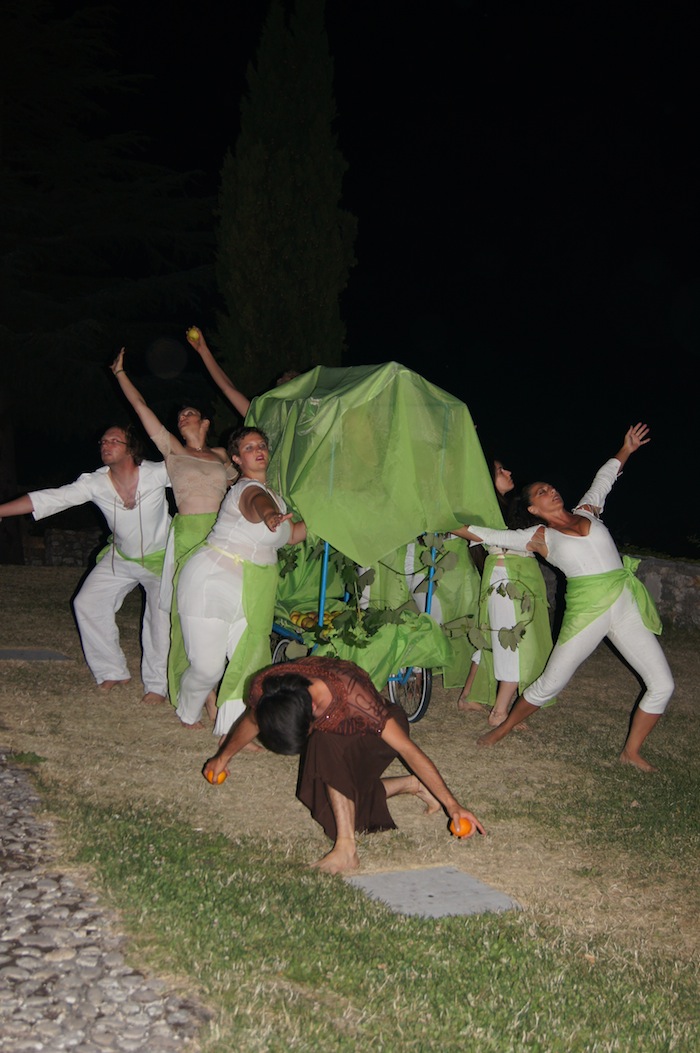 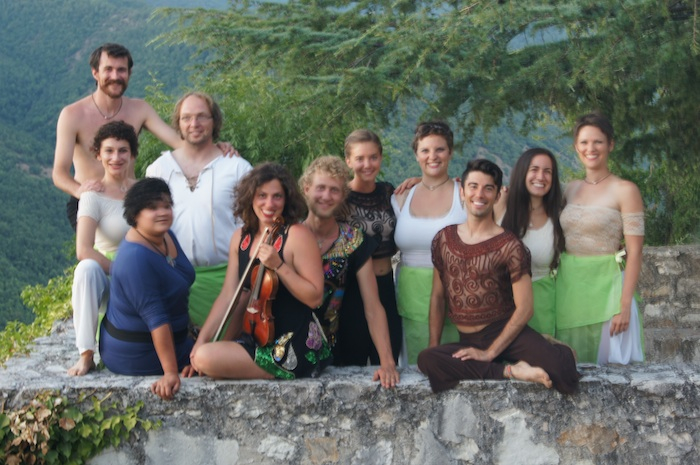 This show is the brainchild of the chef, who also performs—she’s up there doing circus silks on those red fabrics hanging from the top of the tower! I know this isn’t the choreography or concept that the Art Monastery would choose to invent, but it sets them up for their show by rupturing unequivocally any sense that this is merely going to be dinner in a pretty spot. 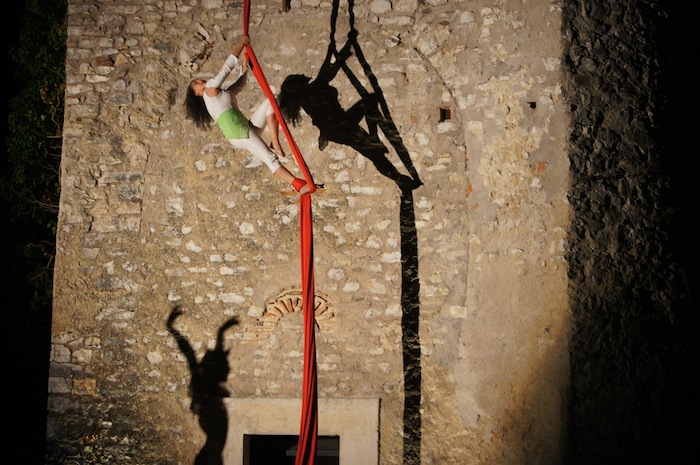 On the nights that the Art Monastery is also the main entertainment, which otherwise varies, the first course is served just before the first act takes place; then the second course, another act, the third course, and a final act.

It’s a late night! After the show, the artists are fed but also shushed—by then it’s 1 a.m. and the village is trying to sleep. The waiters have come to be friends with the artists, and they produce extra bottles of wine, but they’re dying to go home: they work madly, in near-darkness, to shut the place down and they threaten in whispers to roll up the lawn under the company’s feet while they’re at it. The chef gives the artists leftovers to take home; has this changed at all since the troubadours served at court?