…
The Art Monastery is dedicated to cultivating personal awakening and cultural transformation through artmaking, spiritual practice, and reciprocity with the earth. 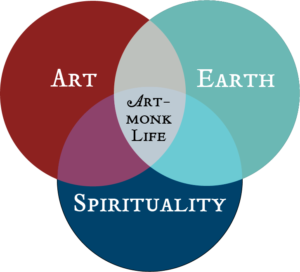 We are artists who meditate and meditators who make art. We aim to live close to the Earth in order to unlearn the oppressive systems of the overculture and cultivate a viable alternative for future generations. 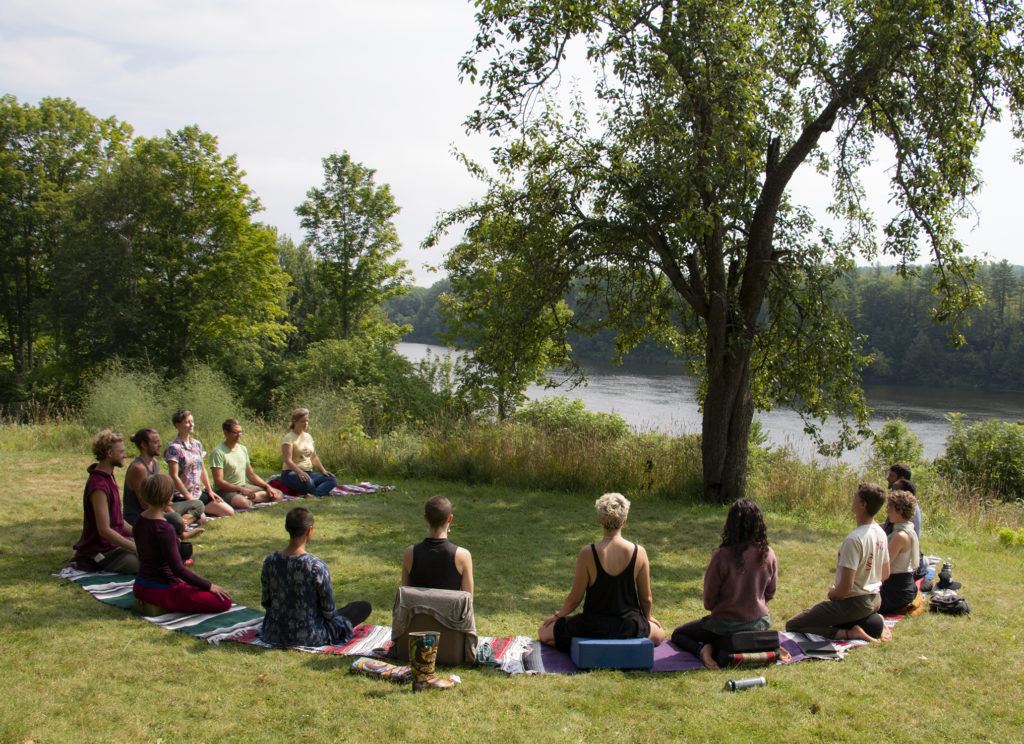 The Art Monastery began in 2007 in a series of historic monasteries across Italy as a secular non-profit arts organization. Ever since, we have hosted visiting artists, offered cultural events for the public, and applied the monastic principles of discipline, contemplation, and sustainability to our creative process. In 2016 we moved our operations to a seven-acre farm in Vermont (pictured above). After seven years in Italy and seven years in Vermont, we are now in residence at Kohala Sanctuary, Big Island, Hawai’i.

Art Monastery Hawai’i resides at Kohala Sanctuary, the permaculture farm of Joel & Michelle Levey. The Leveys are longtime advisers and dear friends of the Artmonks, dating back to the very first Artmonk Retreat in Southern California back in 2010. We are awash in gratitude for the opportunity to collaborate and live in community on & with these 18 acres, resplendent with bananas and passionfruit, Jackson chameleons and geckos, night-blooming Cereus and lotus-filled ponds. We are located on the ancestral lands of the Kanaka Maoli, the northern tip of the Big Island, Hawai’i.

We are dedicated to the liberation of all beings.

We see today’s art as the seeds of tomorrow’s culture, to build a world where

The Art Monastery is dedicated to cultivating personal awakening and cultural transformation through artmaking, spiritual practice, and reciprocity with the earth.

The Art Monastery is a radical experiment that bridges creative and contemplative practices. Through avant garde monasticism, we take up new and old ways of artmaking to create a social ecology defined by heart-centered, body-positive, justice-seeking values.

In this way, we balance the art element of our mission (intuition, activism, and re-wilding) with the monastery element (structure and schedule, personal growth, and ancient traditions).

We support each other in our own journeys of artmaking, spiritual practice and reciprocity with the earth.

We host artists-in-residence, retreats, and gatherings in order to share the practices and values of our social sculpture*.

*Social Sculpture is the practice of life-as-art, as coined by Joseph Beuys.

The Three Fields of Art Monasticism

The three fields of Art Monasticism are not separate, but co-arise within a unified embodied experience.

The Art Monastery exists to bring meaningful art into the world. Our work is for artists to more deeply connect with their creative source and for spiritual practitioners to develop their artistic voice.

We do this by providing a holistic container that includes:

Artmonk spirituality draws inspiration from a variety of Buddhist lineages and earth-based spiritual practices while respecting the wisdom teachings of all world traditions.

We meet ourselves and each other through:

Reciprocity with the Earth

We live increasingly close to the land. Inspired by Robin Wall Kimmerer, we invoke the concept of reciprocity as an attempt to give back to the earth in balance with what we receive.

We steadily cultivate a handmade life to honor our more-than-human family, turning away from mass production and capitalist consumerism. We dedicate effort, time, and money to supporting a whole ecosystem of thriving life.

As a community, we:

*We acknowledge that our species has overreached and created massive, damaging imbalance and ongoing harm. We are part of the privileged, industrialized, over-consuming minority responsible for undertaking widespread, immediate, creative repair work. We vow to do all that we can to live in balance within the web of life.

The pilot site and first major program of the Project was Art Monastery Italia. AM Italia intended to transform a historic Italian monastery into an international arts production center. As an extended experiment in monastic community, a long-term team of Artmonks operated AM Italia and hosted other artists, volunteers, and interns for short periods of time. The community typically peaked in the summertime at 15 to 25 members, but throughout the year individuals (whether permanent members or visiting members passing through) became part of the community that was dedicated to investigating monasticism, co-creating art projects, sharing experimental spiritual practices, building artistic skills and technique, living together intentionally, and taking part in daily living chores and activities. From 2010-2012, Art Monastery Italia was located in the monastery San Antonio in the medieval hill town of Labro (pictured above), 70 minutes north east of Rome. In 2013, the project was hosted in Puglia, Italy in by the Accademia del Rinascimento Mediterraneo.

We offered our first Art Monastic Laboratory in the USA on a 7-acre farm in southern Vermont as well as a weeklong Artmonk Retreat. Meanwhile, we participated in Hosting Social Innovation, a two-year project funded by Erasmus+ and the EU. As such, we created a five short films and a database offering methods for anyone to learn how to help others be innovative.

In 2017 we offered another Art Monastic Laboratory, two Artmonk Retreats (enjoying participants from as farflung as Dubai and Texas), and introduced a brand new weeklong program: the Women’s Wellness Getaway. Continuing with Hosting Social Innovation, we collaborated with three other European organizations to run two one-week Innovation Host Certification seminars in Italy and Poland, as well as co-hosting the Changemaker Festival in Berlin. We also published the workbook Live Your Dream: Start Here, Start Now. The Summer Artmonks created an original theater pieced which toured the east coast US called Bootstraps.

In 2018 we began yearround residency on the ancestral land of the Abenaki people (also known as Vermont), along the shores of the Long River (also known as the Connecticut River). We had four year round long-term core team members with the community swelling to 14 in the summer months and at times up to 21. We began offering many weeklong and weekend art intensives, silent meditation retreats, and artist residencies. We continued those offerings in 2019 and added on collaborations with San Francisco Zen Center, offering retreats in California called heARTmind: Zen & Art.

In 2020 and the onset of the pandemic, we pivoted. We shifted our retreats and workshops to be offered online and introduced weekly meditation groups and embodiment classes. We also began an EU-funded project Hosting Empowerment. A three-year collaboration with seven european organizations, we are creating materials to support those who facilitate the empowerment of others, particularly of marginalized folx. By the end of the project we will publish a text book, a workbook, launch a free online database of empowerment methods, produce a short film, and a self-empowerment app.

In a profound moment of synchronicity and grace, we leaped at the opportunity to move to Hawai’i and take up residence at Kohala Sanctuary in Hawi, Hawai’i. Designed and developed according to principles from permaculture, organic gardening, and indigenous wisdom traditions, this sacred land offers 18 acres of spectacular natural beauty for moving, making art, and finding inspiration in nature.

September-December 2006: The idea is born! Planning phase (based in San Francisco)

January 2010: First Artmonk Retreat at the Integratron in southern California

May-September 2010: Second Art Monastery Summer Festival (based in the monastery in Labro)

January 2011: Second Artmonk Retreat at the Integratron in southern California

May-September 2012: Fourth Art Monastery Summer Festival (based in the monastery in Labro)

August 2013: Base of operations moves to U.S.; programming on pause while we regroup and reflect.

Aug 2013: Beginning of performance collaborations with The Alchemy.