Marcella Calabi, principal consultant at Clarityworks and a multi-talented, award-winning soprano and music teacher, wrote several journal entries over the course of her multi-day stay with the Art Monastery this summer. This is the third of three parts.

~
There’s nothing as serious as a young artist talking about death, and the company has been focused emotionally and intellectually on this theme for the many months since they chose it, long before some of the performers arrived. They’ve been singing requiem chants every night… but, after all that, I believe their piece is not as intense and difficult for the audience as they may think it is.

This is all kinds of ironic: they’ve gotten resistance for trying to sell a work they call “To Death” at a summer vacation spot. I’m not just talking about the unfortunate coincidence of the hotelier’s son’s death, which caused many things to be canceled irrespective of theme, but elsewhere. Of course, they should never sell out their artistic integrity to commercial forces, but I think they don’t ever have to: there’s an important difference between the process of their privately-held discussions, creative impulses, and behind-the-scenes work, and the product of that process. Having decided (good choice!) not to show an hour of unrelieved grief and collapsing bodies, they made a piece born of attention to death that can’t help but remind us constantly of the other side of the coin: the drive for life.

And meanwhile, as I write this, every quarter-hour or so, a small plane or helicopter roars low over the monastery, dragging a super-sized water-bucket to dump on the fire across the valley. There are flames visible above the trees even at this distance, so think how big they must be. If these people didn’t already have the gumption to seize the day, this would remind them.

I was with the Art Monastery Project for a week. Their days are intense and the company was arriving at the culmination of the season. They’re all stretching all the time, and all under a lot of pressure. And several are leaving right afterwards to stressful things like auditions and job searches back at home, so the individual tension level had the potential to be high. But they’re adults and good people, grown-up enough to each handle their own issues and also to accept collaborative contributions, not only from each other but also from me as an older peer. It was a privilege to be able to lend a hand.

We took a field trip to outside of Spoleto where they performed as guest artists for a workshop in physical theater at LaMaMa Umbria, which is an outpost of the avant-garde production house in New York (where Raffi and Neva’s NYC-based company, LOOM, performed last spring. That’s only partly a coincidence; it is a particular professional subculture, and the connections within it are looping into a real network). 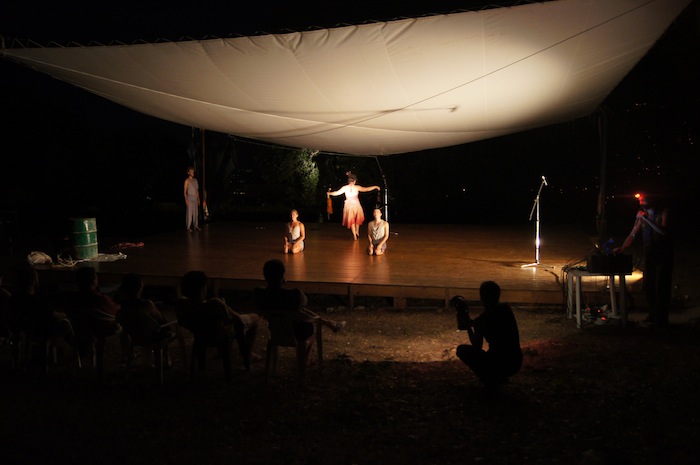 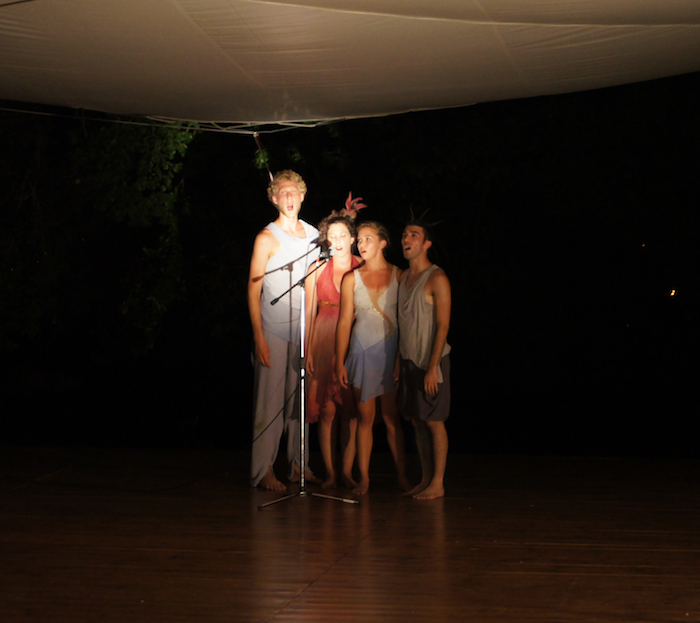 It was not only cool but also potentially important for the Art Monastery to be performing for an audience of their colleagues. This required grit and flexibility. The setup was totally different from that of the dinner theater: a proscenium stage and no breaks between acts. Those utterly shifted the rhythm and the transitions, not to mention issues of physical stamina, because some of the dances are intense. And the schedule was such that they walked into the space lugging the sound equipment in boxes… and performed in full hair, makeup, and costume less than an hour later.

Oh, and we’d driven past a roadblock to get there because of another wildfire. They performed on an outdoor stage with a burning hillside as their dramatic backdrop, a forest glowing red with intermittent exclamation points as pine tree after pine tree exploded in flames. Those of us not actually on stage were occupied with filming and lighting and suchlike, but we carved out part of our attention for the wider environment, prepared to call for evacuation mid-show if the wind shifted in our direction!

I’m going to leave out the full details about how it took my car three hours to get home because the GPS tried to take us the direct route—that is, straight over the mountains, which might actually have led us directly into the wildfires if my FIAT Panda hadn’t been literally incapable of getting up the unpaved road with five people inside…

The Art Monastery’s season will climax with two performances at the Spoleto Fringe Festival this coming weekend. On their field trip day to LaMaMa Umbria, we stopped in Spoleto for them to do a publicity stunt, singing and dancing their way up the old center of the city, where it’s closed to all but pedestrian traffic. It made your brain swim, trying to figure out whether the scene was ancient or modern, local or foreign: no, it was timeless and human the way only the arts can be. 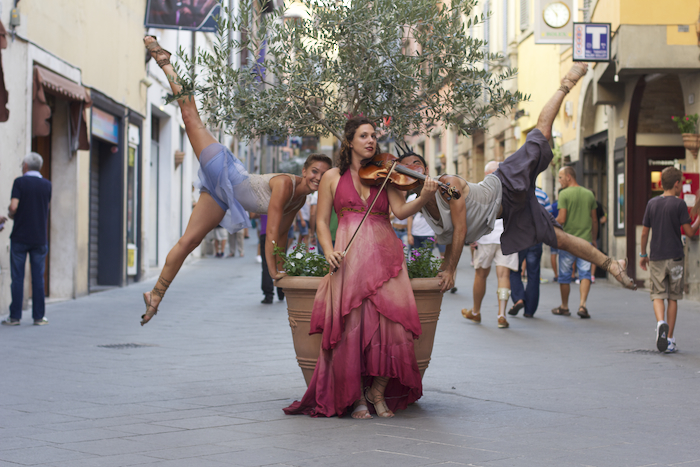 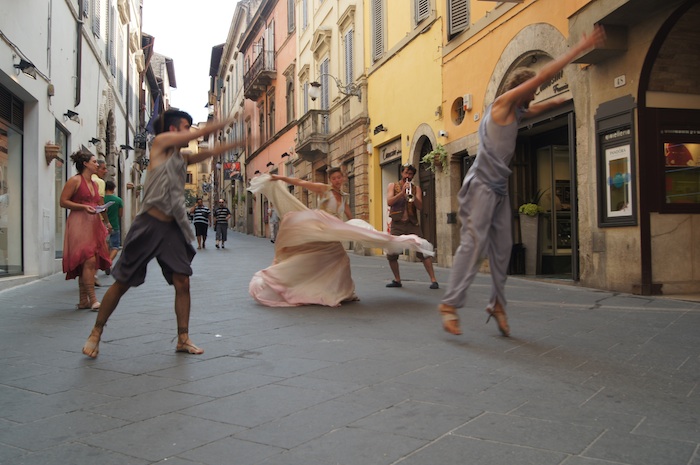 Spoleto has happened. I wasn’t there; I can’t wait to hear about it. Meanwhile the director and cast changed the title of their work toL’eterno smascherato—“The Eternal, Unmasked.” After what I wrote above, it won’t be a surprise that I think this is a smart move, but what touches me the most is the inventiveness and rightness of that phrase for the piece they’ve created. What intelligent, thoughtful, deeply artistic minds are at work here!

And it’s another step towards a great future. I hope anyone reading this journal joins me in cheering them on.