Betsy is an American visual artist whose investigations of sacred geometries in paint and video have been exhibited from San Francisco to Amsterdam. She is also an internationally ranked synchronized swimmer and is co-founder of San Francisco Tsunami Synchronized Swimming. She was previously Editor of Publications at Albright-Knox Art Gallery, the world-renowned museum of Buffalo, New York, and founded Shizknits, an innovative small business developing knitted accessories and custom sweaters. Betsy holds degrees from Yale University and San Francisco Art Institute, and her writing and visual art have been featured in publications such as Buffalo Magazine, Readymade, Lucky, Bust Magazine, MacWorld, San Francisco Chronicle, Houston Gazette, and Knitty, and has appeared repeatedly on HGTV’s “Crafters: Coast to Coast,” DIY’s “Knitty Gritty,” and CBS’s “Evening Magazine.”

Christopher is an American tenor specializing in 17th century music and Gregorian chant, as well as a director of traditional and experimental ritual theater projects. Educated at Princeton and California Institute of the Arts, he moved to Amsterdam on a Beebe Foundation Fellowship in 1999 to study baroque singing with Max van Egmond and Peter Kooy. With his music ensembles (such as The Pacelli Project) and theater projects (such as Canticum), and as a tenor with conductors including Gabriel Garrido, Eugeen Liven d’Abelardo, and Daniel Reuss, he has explored not only historically-informed performance practice in concerts, but also brought to life this music in its original liturgical context through ritual reconstructions. Simultaneously, he has directed avant-garde music theatre pieces from Burning Man to Bali that explore similar issues but in radically creative contexts.

Liz Maxwell is a theater director, physical performer, and the Artistic Director of the Art Monastery Project. Liz has been living at the Project’s pilot site, Art Monastery Italia, since March 2010, where she has directed site-specific traveling spectacles and original theatrical events (including Ad Mortem, AMP’s summer 2012 devised theater piece), in addition to singing everything from American jazz rep to Gregorian Chant concerts and medieval music. As Artistic Director, Liz designs the Project’s multi-disciplinary programs and works to extend international opportunities to high-level artists who have an interest in exploring the inner life of the artist and the monastic principle of community.

Originally from New Orleans, Liz graduated from Louisiana Scholars’ College at Northwestern State University in May 2008 with a double major in Theatre (Minor: Dance) and Liberal Arts (Concentration: Humanities and Social Thought). Her primary interest as a theater director lies in devising original work such as gravesongs., which was voted the Audience Pick of the 2009 Cincinnati Fringe Festival and earned three Cincinnati Acclaim Awards, in association with a Directing Internship with the Ensemble Theatre of Cincinnati. In 2011, Liz trained with the prestigious SITI Company in New York, deepening her interest in the Viewpoints and other devising techniques to create inventive, meaningful moments on stage. As an artist, Liz seeks to create work that is profound, funny, smart, epic, and relevant. She has an unending fascination with human beings: how human beings cope with being alive, how and why individuals turn themselves into groups (socially, politically, and spiritually), and the many diverse ways this occurs in cultures all around the globe. Liz strives to make work that is deeply personal, culturally specific, and at the same time touches upon the universal.

After studying mathematics, Charles discovered the art and science of music theory seven years ago and has been a serious musician ever since. Since then, Charles has been involved with approximately 20 choral ensembles, three of which he founded and led, including the first ever all-male youth chorus in Santa Cruz, California, and has sung solos in pieces ranging from choral masterworks (Bach’s Christmas Oratorio and Handel’s Messiah) to musicals and Peruvian folk songs. He has studied voice under several members of the world-renowned San Francisco chorus, Chanticleer, and studied music theory in college, but is primarily a self-taught performer and most often plays and sings his original music. His stage experience ranges from actor to dancer to instrumentalist in a range of media, including vaudeville shows, symphonic wind ensembles, funk bands, and musicals and plays, including last year’s rock opera How To Survive The Apocalypse: A Burning Opera, in which he played 11 different instruments. Charles has been at the Art Monastery since April 2010 and is now the Project’s Chief Financial Officer, Music Director, Community Director, and Chef.

An interdisciplinary artist from Boulder, Colorado, Nathan studied Mandarin Chinese and Linguistics at the University of Colorado, and eventually moved to Seattle to get an MBA in Sustainable Business from Bainbridge Graduate Institute. As a graphic and web designer, he has focused on clients involved in arts, activism, socially responsible investment, sustainable food systems, grassroots economics and social justice. Nathan is currently based in San Francisco and directs Art Monastery programs and workshops in and around the Bay Area. He is pursuing an MFA in New Genres at San Francisco Art Institute. Website 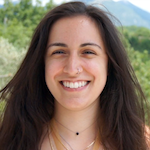 Christina is a multilingual writer, editor, teacher, translator, blogger, vegan, and eternal student. Born and raised in Montréal, Québec, Canada, she completed her BA at Concordia University, studying Spanish, Italian, and Professional Writing. In the past, she has sported titles ranging from bookseller to receptionist, but she currently embraces her role as “Language Artist” at Art Monastery Italia. She has most recently called Toronto home, where she completed her MA in Italian Studies at the University of Toronto and will begin her PhD in Italian Studies at the same university in 2013. It was important to her, however, to take a break between these two degrees to continue the journey she began with the Art Monastery in April 2011, returning to explore the opportunities and experiences that living in community, creativity, and contemplation have to offer.