Requiem for a Pink Moon: Stunning 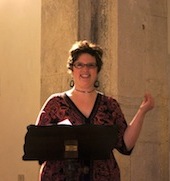 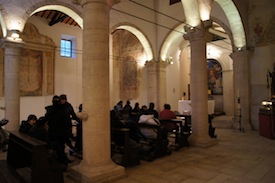 Joel Frederiksen’s concert celebrating the release of his new CD “Requiem for a Pink Moon,” performed to a packed church, was truly bravo. The perfect project to be developed at the Art Monastery, the CD bridges Nick Drake’s folk classics and Elizabethan lute. Amongst our most favorite performances hosted by the Art Monastery, Joel’s dark and buttery voice transports you to other times and other places. It summons out of the ancient walls of the church a response that reaches directly into your chest and firmly, gently touches your heart. 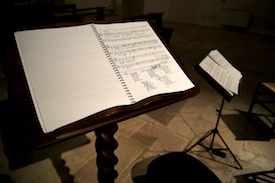 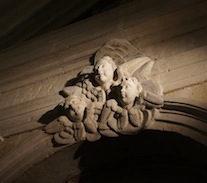 Joel’s lovely partner Carolina accompanied him in a couple song, the violin adding an unexpectedly fresh element. The final song involved Artmonks and visitors, joining in on the Gregorian portion of the requiem as Joel led them to the back of the church. Moving in the space brought the architecture alive even more. A real show stopper as the finale. 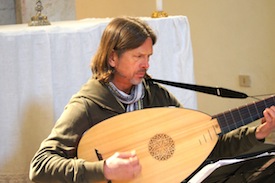 Many thanks to Joel and Carolina for returning to the Art Monastery, for joining our family again, for bringing such beauty, such talent, and such opening. Thank you for completing the circle, returning with the finished CD, work that began at his first Art Monastery visit three years ago. May you return again and again!